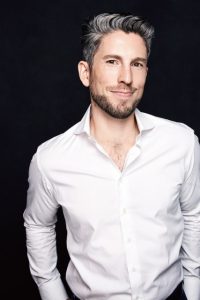 Lance Richardson has been announced as the winner of the 2020 Hazel Rowley Literary Fellowship. The announcement was due to follow the Hazel Rowley Memorial Lecture on Friday 20 March, which unfortunately had to be cancelled due to public health. Due to the cancellation of the lecture, Lance recorded an acceptance speech, which can be viewed here. More details of the announcement are on Writers Victoria website.

Lance is writing a biography of the writer, naturalist and Zen Buddhist Peter Matthiessen, who is probably best known as the author of The Snow Leopard. This is the account of Matthiessen’s journey in remote Nepal on the Tibetan Plateau. Matthiessen was also the co-founder of The Paris Review in the early 1950s.

Lance, who currently lives in Austin, Texas, is a writer and journalist with 10 years’ experience reporting everywhere from war-torn north Sri Lanka to a shaman’s living room outside Fort Worth, Texas. His previous book, House of Nutter: The rebel tailor of Saville Row, was named one of the best books of 2018 by The Sunday Times, The Mail on Sunday, Esquire and the American Library Association. 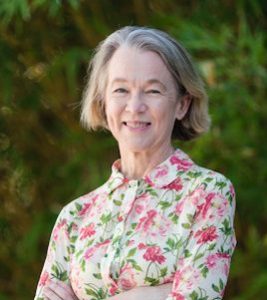 This year the judges decided to give a Highly Commended award of $5,000 to Gabrielle Carey for her project on writer Elizabeth von Arnim, a successful author in her own right and also the cousin of Katherine Mansfield. Gabrielle’s resulting book, Only Happiness Here: In search of Elizabeth von Arnim, was subsequently published by UQP in October 2020. Her book was shortlisted for the 2021 Mark and Evette Moran Nib Literary Award.

Gabrielle is a writer, essayist and teacher who has written books on Ivan Southall and Randolph Stow, among others. Her book Moving Among Strangers: Randolph Stow and My Family won the 2014 Prime Minister’s Literary Award for Non-fiction and was shortlisted for the National Biography Award. 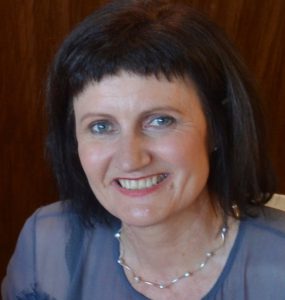 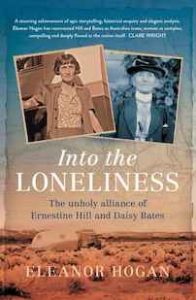 Eleanor Hogan (NT) was announced as the winner of the 2019 Hazel Rowley Literary Fellowship at Adelaide Writers’ Week on 4 March 2019. The announcement followed the Hazel Rowley Memorial Lecture given by Maria Tumarkin, award-winning non-fiction writer and cultural historian. Maria’s most recent book is the acclaimed Axiomatic.

Eleanor is writing about the friendship between writer and journalist Ernestine Hill and self-taught ethnologist Daisy Bates. Hill and Bates collaborated on the controversial bestseller The Passing of the Aborigines, which was published in 1938. Eleanor will use the Fellowship money to complete her research with Aboriginal communities who knew Hill and Bates, and to bring her book manuscript to completion.

Eleanor’s book Into the Loneliness: The unholy alliance of Ernestine Hill and Daisy Bates was published by NewSouth Books in March 2021. Eleanor was interviewed about her book on Radio National’s Saturday Extra on 4 April 2021. She was also interviewed on ABC Nightlife on 22 April 2021, and Caroline Baum interviewed Eleanor on 22 October 2021 for her podcast series Life Sentences. Into the Loneliness was shortlisted for the 2021 Queensland Literary Awards in the Non-Fiction category.

Eleanor is a non-fiction writer with a professional background working in Indigenous policy research. Her writing draws strongly on her experience living and working in central Australia since 2000. Her previous book, Alice Springs, was published in 2012 as part of the NewSouth Publishing Cities Series. Eleanor won the Peter Blazey Fellowship in 2017. 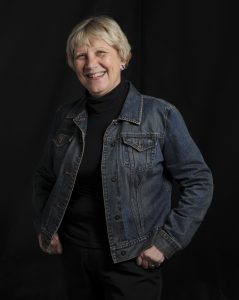 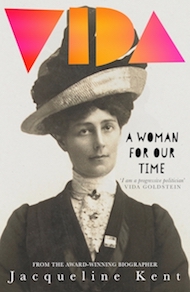 Jacqueline Kent (NSW) was announced as the winner of the 2018 Hazel Rowley Literary Fellowship at the Wheeler Centre on 8 March 2018.The announcement followed the Hazel Rowley Memorial Lecture given by Jenny Hocking, one of the Rowley judges and the award-winning biographer of Gough Whitlam. Jenny’s talk was on the ‘Politics of Biography’, including her attempts to obtain the release of letters between Sir John Kerr and the Palace.

Jacqueline is writing a biography of Australian suffragist Vida Goldstein (1869-1949). Vida Goldstein was a tireless political campaigner and advocate for votes for women. She stood for the Senate in 1903, the first year that women could vote and stand for Parliament in Australia. Jacqueline’s book, Vida: A Woman for Our Time, was published by Penguin Books in September 2020.

Jacqueline has previously published the award-winning A Certain Style: Beatrice Davis, A Literary Life. Her book An Exacting Heart: The Story of Hephzibah Menuhin was shortlisted for many awards, and her book The Making of Julia Gillard was a best seller, updated three times, with a sequel Take Your Best Shot.

In 2019 Jacqueline published a memoir, Beyond Words: A Year with Kenneth Cooke, which was shortlisted for the 2020 National Biography Award. 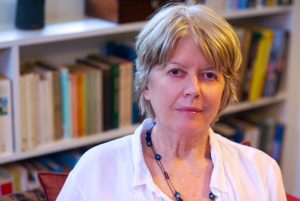 This year the judges decided to give a special award of an equal amount ($15,000) to Drusilla Modjeska (NSW) in recognition of her significant contribution to the art of biography and memoir over many years, spanning personal memoir and more traditional biography.

Drusilla has been a great innovator in her writing, with books such as Poppy, The Orchard and Stravinsky’s Lunch.

Drusilla is currently working on the second instalment of her memoir, to be called ‘First Half Second’. 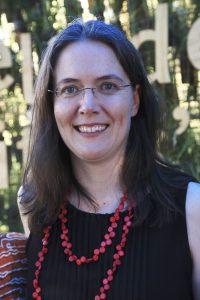 Ann-Marie Priest (Queensland) was announced as the winner of the 2017 Hazel Rowley Literary Fellowship at the Adelaide Writers Festival on 9 March 2017. The announcement followed the Hazel Rowley Memorial Lecture, given by Maxine Beneba Clarke, the 2014 recipient of the Fellowship for her memoir The Hate Race.

Ann-Marie is using the $15,000 Fellowship to write a biography of Australian poet Gwen Harwood (1920-1995). She has spent time in Tasmania to immerse herself in the places where the adult Harwood lived, worked and wrote. Ann-Marie has written an article about how she used the Fellowship. This article was originally published in The Victorian Writer.

Ann-Marie works part-time as a lecturer at Central Queensland University in Rockhampton. She has previously published a book on the love lives of 20th century writers, called Great Writers, Great Loves: The Reinvention of Love in the Twentieth Century. Her forthcoming book, A Free Flame, on the role of vocation in the lives of four Australian writers (including Gwen Harwood), will be published by UWA Publishing.

For the first time, in 2017 the Fellowship has also made a highly-commended award of $3,000 to Suzanne Spunner (Victoria), who is writing a biography of East Kimberley artist Rover Thomas. Rover Thomas was one of Australia’s most successful Indigenous artists and his works command record-breaking prices. Suzanne is a playwright and art historian. 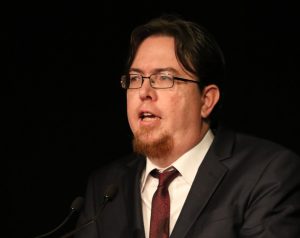 Matthew Lamb (Tasmania) was awarded the 2016 Fellowship for his proposed cultural biography of the Australian writer Frank Moorhouse.

Matthew was announced as the winner of the 2016 Fellowship at an event at the Wheeler Centre in Melbourne on 9 March. At the same event three previous recipients of the Hazel Rowley Literary Fellowship – Stephany Steggall, Maxine Beneba Clarke and Caroline Baum – spoke about the Art of Biography on a panel chaired by Janine Burke, one of our judges.

Matthew is the editor of the Review of Australian Fiction, which he founded in 2012. Since 2013 he has also been the editor of Island magazine, a role he left in order to work on the Moorhouse biography, among other writing projects. 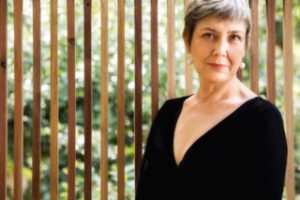 Caroline Baum (New South Wales) was announced as the winner of the 2015 Hazel Rowley Literary Fellowship at the Adelaide Writers Week on 4 March 2015. The announcement followed the Hazel Rowley Memorial Lecture, given by David Marr    .

Caroline was awarded the Fellowship for a proposed biography of Lucie Dreyfus (1870-1945). Lucie Dreyfus was married to Alfred Drefyus, the French artillery officer who was at the centre of one of the most divisive political scandals of the late nineteenth and early twentieth centuries.

Caroline is a freelance journalist and broadcaster. She is Editorial Director of Booktopia, Australia’s largest online bookseller. 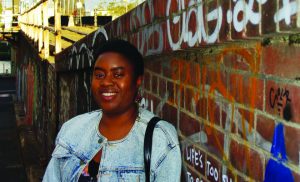 Maxine Beneba Clarke (Victoria) was announced as the winner of the 2014 Hazel Rowley Literary Fellowship at the Writers Victoria Salon on 11 March 2014.

“The opportunity to research and re-trace my family’s migration path will not only be momentous on a personal and emotional level, but will, I hope, result in a work of non-fiction which significantly contributes toward contemporary post-slavery dialogue on race, migration, colour, ancestry, genocide, and the various places we think of as home,” Maxine said.

In 2013, Maxine won the Victorian Premier’s Literary Award for an Unpublished Manuscript with her debut short story collection, Foreign Soil (published by Hachette Australia in May 2014). Maxine is also the author of the poetry collections Gil Scott Heron is on Parole and Nothing Here Needs Fixing, as well as being an Australian slam poetry champion. 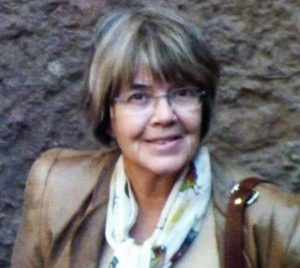 The 2013 award went to Stephany Steggall (Queensland) for a biography of Australian writer Thomas Keneally. Her book Interestingly Enough…the Life of Tom Keneally was subsequently published in 2015 by Nero.

The presentation of the award to Stephany followed the 2013 Hazel Rowley Memorial Lecture given by Alex Miller at Adelaide Writers Week on 6 March 2013. Alex Miller’s lecture has been published in his book The Simplest Words (2015, Allen & Unwin) in the chapter ‘A Circle of Kindred Spirits’, p.299. The lecture was also published in Southerly magazine in 2013 (Vol 73, No 3).

Stephany has previously published biographies of Colin Thiele (2004), Ivan Southall (2006) and Bruce Dawe (2009).  She has worked at AustLit as a research assistant and at the time of winning the Fellowship was working on a history of the Australian Society of Authors, Status and Sugar, which was published in 2013. 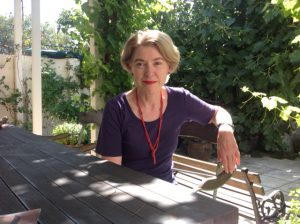 The inaugural winner of the 2012 Hazel Rowley Literary Fellowship was Mary Hoban (Vic) for a biography of Julia Arnold, née Sorell (1826-1888). Mary’s book, An Unconventional Wife: The life of Julia Sorell Arnold, was published by Scribe in April 2019.

Although not a well-known figure herself, Julia Sorell was famously well-connected. Born in Hobart, Julia was the granddaughter of Lieutenant Governor William Sorell. She was the daughter-in-law of Reverend Thomas Arnold, the famed headmaster of Rugby School (as pictured in Tom Brown’s Schooldays) and sister-in-law to the poet Matthew Arnold. Her daughter Mary was the famous Victorian novelist Mrs Humphry Ward and her grandchildren were novelist Aldous Huxley, scientist Julian Huxley and author Janet Penrose.

The fellowship announcement followed a discussion at the Wheeler Centre between novelist Alex Miller and historian Jim Davidson to mark the first anniversary of Hazel Rowley’s death. A video of the event is available at the Wheeler Centre website. Mary Hoban spoke about her project with Jim Davidson and Della Rowley on Books and Arts Daily with Michael Cathcart on 15 March 2012. Click here for Podcast.

In 2016 Mary wrote an article on ‘The Challenge of Biography’, which can be found on the Writers Victoria website.