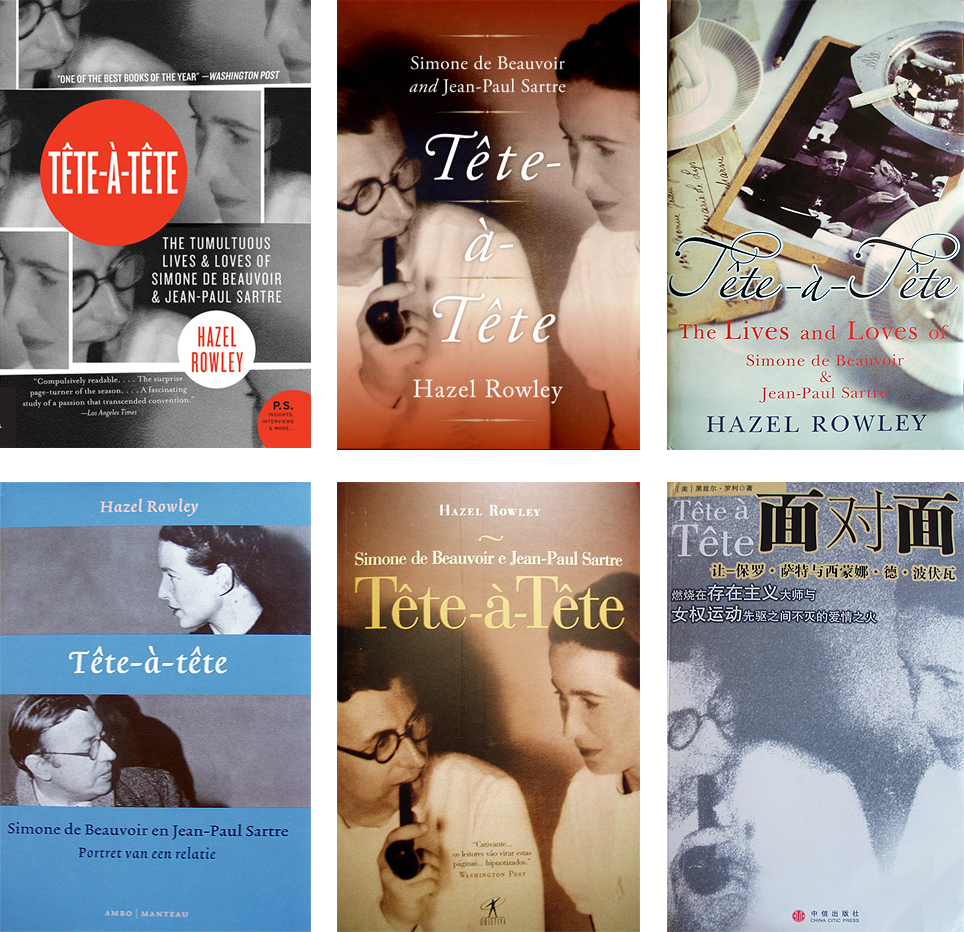 Tête-à-Tête was a bestseller in Brazil, and Lire Magazine has named Tête-à-Tête (Grasset) the best book of literary nonfiction published in France in 2006.

They are one of the world’s legendary couples. We can’t think of one without thinking of the other. Simone de Beauvoir and Jean-Paul Sartre — those passionate, freethinking existentialist philosopher-writers — had a committed but notoriously open union that generated no end of controversy. Through original interviews and access to new primary sources, Rowley portrays them up close, in their most intimate moments.

The impact of their writings on modern thought cannot be overestimated, but Beauvoir and Sartre are remembered just as much for the lives they led. They were brilliant, courageous, experimental, and Tête-à-Tête makes us feel the passion, energy, daring, humor, and contradictions of this remarkable relationship.

“A wealth of information … woven into an exhilarating narrative…
“Rowley, a feminist who interviewed Beauvoir in 1976 and who also shows great empathy with Sartre, lets us see them both — laid bare. She does this by exploring in detail their relationship with each other and with the people they were close to, set against a background of the rising tensions of the 1930s (they first met in 1929), the Second World War, the Cold War, and anticolonial and anti-imperialist struggles — especially Algeria and the student revolt of May 1968.
“Tête-à-Tête captures the uniqueness of this fascinating relationship, as well as their orbital ones, with an ethic of transparency which would not have displeased either of its protagonists.”
— Jean-Pierre Boulé, The Times Literary Supplement

“Tête-à-Tête has just about everything: sex, philosophy, politics, and the world’s most unconventional love story. Hard as I tried, I could not put it down.”
— Barbara Ehrenreich

“Sympathetic but clear-eyed, … scrupulously nonjudgmental. Rowley … manages to recapture the charm and the brilliance of the relationship.”
— William Grimes, The New York Times

“Compulsively readable … the surprise page-turner of the season … Rowley captures not just her subjects’ sexual shenanigans but also their voices, their unflagging work ethic and their drive to unfetter mankind from self-imposed limitations. An admiring but balanced portrait emerges of activist intellectuals determined to practice the freedom they preached. Rowley summarizes their ideas with impressive clarity and brevity …A fascinating study of a passion that transcended convention.”
— Heller McCalpin, The Los Angeles Times

“Utterly compelling … The reader of Rowley’s book has the impression not so much of reading, or of finding information, as of hearing, of listening in. To read her prose, both weighty and sinuous, is to become as absorbed in these lives as though their dramas and their dilemmas, their triumphs and their disappointments, were unfolding at the next table in a Parisian cafe.”
— Belinda McKeon, The Irish Times

“Hazel Rowley … has perused more of Sartre and Beauvoir’s unpublished correspondence than any previous biographer, and interviewed extensively. The book generated controversy from the get-go … Rowley is an engrossing narrator. Her book tells Beauvoir and Sartre’s repellent, inspiring and unlikely tale more completely and concisely than it has ever been told before.”
— Cristina Nehring, The New York Times Book Review

“With Tête-à-Tête, Rowley proves that it is possible to be as juicy as People magazine while maintaining a convincing scholarly voice.”
— Pat Donnelly, Montreal Gazette

“An update on a breaking story.”
— Louis Menand, The New Yorker

“This wonderfully crafted narrative … enthralls like a novel. Thoroughly researched and well written, this dual biography is highly recommended for public and academic libraries … as Rowley excels in linking her subjects’ philosophical ideas and works to their lives.”
— Jason Moore, Library Journal

“Rowley romps through the major entanglements, loves, triangles, friendships and affairs engaged in by the authors of, respectively, the seminal feminist work The Second Sex and the controversial autobiography Words. And to place these fascinating interactions into literary and biographical context, Rowley draws from vast stores of published and unpublished writings, correspondence and interviews.”
— Publishers Weekly

“The book was no easy task for Rowley, a fine writer and a huge fan of the couple (especially de Beauvoir) who worried that the petty — and frequently sordid — details of their lives might end up trivializing the two … Rowley does a marvelous job of sifting through this tangled web and putting it in context.”
— Brian Bethune, Macleans, Canada