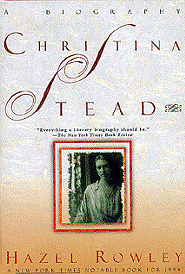 CHRISTINA STEAD left Sydney for Europe in 1928 at aged 26 and did not return to Australia until she was 72. By then she had become a world–class writer, rivalling Patrick White as the finest writer Australia has produced. She wrote fiction that was large and passionate, original and demanding, as was her life. She was a cosmopolitan writer with her genius for portraying disparate locales, voices and expressions. A child of the Edwardian era, she came to maturity during that period of cataclysmic change straight after the Great War, before radio and jet travel transformed communications.

She arrived in England in 1928, and Wall Street crashed the following year. The movements of Stead and her companion Bill Blake reflected the tide of expatriates. They were in Paris at the same time as James Joyce and Gertrude Stein. They were in the United States when John Steinbeck published The Grapes of Wrath. Then when left-wing solidarity gave way to the Second World War and its tragic aftermath, the Cold War, Stead and Blake fled McCarthyist America for Europe.

Stead was fascinated by ordinary lives and her curiosity about other people was unquenchable, but she was the least reliable of sources when it came to her own life. In later life, she destroyed all drafts of her manuscripts and most of her private papers, diaries and intimate correspondence. Stead would sometimes say she had no need to write an autobiography; she had already written it in her books.

Her fiction is reality transmuted, modelled on her family, her friends and herself – a life that was tempestuous, passionate and courageous.

“Christina Stead has the fullness of tragedy, with its glorious peaks and dismal abysses. It is a model of clarity. Ms. Rowley’s shrewd selectivity and handling of anecdote makes the book compellingly readable.
“Rowley’s interpretation of the novels and their creator is, for the most part, thoroughly persuasive. Her tracing of what she calls ‘Stead’s shadow self’ from her unhappy childhood through the crucible of her fiction to the final shambles of her later years gives the biography a vigorous and unnerving momentum, reminiscent of Stead’s own fiction. Christina Stead is everything a literary biography should be.”
— Michael Upchurch, The New York Times Book Review (cover review)

“Hazel Rowley’s book can hardly be faulted for its sympathy and intelligence. It is unlikely to be bettered.
We follow Stead through her departure from Australia in 1928, her exile in Europe, and her ceaseless wandering: as an MGM screenwriter in the United States, then in miserable obscurity in England during the Fifties and Sixties, scavenging a living from literary scraps, and slumming in hotels or one-room flats.”
— James Wood, The Guardian (London)

“Christina Stead has long needed a good biographer, and here she is. Hazel Rowley is no pedant, boring the reader with a maze of footnotes, nor does she use her subject to focus her own needs, and the result is a fine and balanced book.”
— Doris Lessing, The Independent (London)

“Hazel Rowley, in this splendidly detailed account, supplies the narrative that makes sense of the novels’ angry, many-voiced, impatient, digressive brilliance.
“Hazel Rowley, who is as patient and tactful as Stead was impatient and savage, has portrayed her ‘monster’ with exemplary clarity (and charity).”
— Lorna Sage, The Times Literary Supplement

“Neither [Stead’s] life nor her art ran smoothly, and it is the measure of Hazel Rowley’s achievement in Christina Stead: A Biography that she dodges none of the difficulties, while managing to produce an exceptionally readable and enjoyable book.
“This is the kind of biography that disproves, by its intelligence and its generosity of spirit, the modish notion that the genre is flawed and that the biographer necessarily exploits and betrays the subject. Stead’s nature and behaviour could be monstrous, but Hazel Rowley, an Australian academic, is never judgmental. Her book is a thorough and perceptive delineation of a complex, unhappy woman who was also a great writer. It is compassionate about her character and enlightening about the sources of her art.”
— Anne Chisholm, The Observer (London)

“Prickly about her privacy, Stead did a lot of burning, encoding, and so forth against the day when some biographer might intrude. Luckily for her readers and devotees of literary gossip alike, she missed mountains of material. The match (or mismatch) between Stead’s real and projected lives uncovered by Rowley proves fascinating.
“One closes Rowley’s long, exhaustively researched, impeccably fair biography regretting the incomprehension that embittered, and in the end silenced, the voice of this true literary original.”
— Elizabeth Ward, The Washington Post Book World

“Christina Stead, who is better known to an international reading public than Patrick White, spent much of her life in poverty and died in her native Australia an eccentric old lady, excessively fond of drink, unable to write and subject (in her 70s) to infatuations that bordered on the delusive.
“It’s a hell of a life that Hazel Rowley has on her hands. It is to the credit of the biographer that she makes the reading of Stead’s life, which has its pits of negativity, both willed and suffered, a profoundly moving experience. This is biography of the highest order, as finely organized as anything by Ellmann and with a command of narrative tempo that will put it on the shelf next to Marr’s Patrick White as one of the finest biographies ever written about an Australian.”
— Peter Craven, The Age (Melbourne)

“Christina Stead: A Biography will, I’m sure, in time become one of those stories from Australian literary life, which simply have to be read by anyone interested in Australia’s intellectual and social history, in the literature of the English-speaking world, and in the biographer’s art at its most consummate.”
— Robert Dessaix, 24 Hours (Sydney)

“Rowley has written the book I longed to read when I first discovered Stead — a perceptive and comprehensive examination of an extraordinary writer’s life and her uncompromising artistic vision.”
— Diane Cole, Newsday (New York)

“So rapturous have been the many other reviewers for Hazel Rowley’s biography of Christina Stead that surely it remains only for me to add the footnote ‘I agree. Buy the book.’ Rowley’s power to weld the personal and literary aspects of Stead into one figure produce an astonishing result: a portrait that gives her subject more life than we find in most people we meet. Christina Stead: A Biography is a wonderful story, to be read in a few sittings, about an uncomfortable subject.”
— Bruce Gillespie, The Melburnian